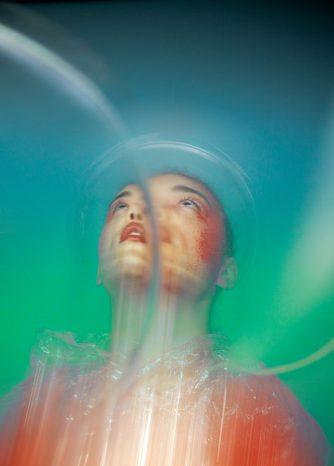 What if all people suddenly disappear, can technology continue without us? Or would technology miss us?

Welcome to Mars. You take a walk among the remains of an abandoned human colony. The residents who once settled here have disappeared without a trace. Strolling through the Pompeii of the future, you hear a soundtrack of stories, music, conversations and live ambient sounds, led by a guide who has been left behind there.

Technostalgia takes you into the future. Mankind has left Earth and attempted to settle on Mars. But life on Mars appears much more hostile than imagined and everyone gets chronic nostalgia for Earth. Again man searches for a new place. Somewhere in infinity there must be a place where everything is good and beautiful?

A last servant left behind welcomes us. Together we walk through the remains of an abandoned world. He looks back with us at the fruitless attempts of man to shape a new world here. We are introduced to former Mars residents; a demented, pregnant young woman, a father whose child wants to play outside, a biologist with the task of growing edible food and a race-optimistic man. Through headphones we hear their stories, fragments of dialogues from the past, live ambient sounds and music, while we wander through the abandoned landscape.

In co-production with Strijbos & Van Rijswijk, the Ulrike Quade Company went on an archaeological discovery tour in Technostalgia in the dune landscape of Terschelling during Oerol, 14 to 23 June 2019.

Under the direction of Ulrike Quade, with music by composer duo Strijbos & Van Rijswijk, text by filmwriter Marcel Roijaards and the voice of actor Rick Paul van Mulligen, Technostalgia becomes an audio tour that takes you through the deserted landscape of Mars.

,,Is there life on Mars? Almost fifty years after David Bowie asks the same question, Ulrike Quade Company answers. And not in a way that will cheer you up.’’

,,This modern Iliad is the showpiece of a futuristic edition of Oerol (…) An ominous space adventure that nicely combines sound and landscape.’’

,,A Mars colony and the downfall of sailor life: Oerol is filled with dark visions of the future (…) A cleverly made audio tour that breathes the spheres of a sick future much like the Netflix success show Black Mirror.’’

Technostalgia is made possible in part by: Performing Arts Fund, Amsterdam Fund for the Arts, Municipality of Tilburg, Province of Noord-Brabant, Lira Fund and [ºº] elephantcandy

This site uses cookies. By continuing to browse the site, you are agreeing to our use of cookies.

We may request cookies to be set on your device. We use cookies to let us know when you visit our websites, how you interact with us, to enrich your user experience, and to customize your relationship with our website.

Click on the different category headings to find out more. You can also change some of your preferences. Note that blocking some types of cookies may impact your experience on our websites and the services we are able to offer.

These cookies are strictly necessary to provide you with services available through our website and to use some of its features.

Because these cookies are strictly necessary to deliver the website, refuseing them will have impact how our site functions. You always can block or delete cookies by changing your browser settings and force blocking all cookies on this website. But this will always prompt you to accept/refuse cookies when revisiting our site.

We fully respect if you want to refuse cookies but to avoid asking you again and again kindly allow us to store a cookie for that. You are free to opt out any time or opt in for other cookies to get a better experience. If you refuse cookies we will remove all set cookies in our domain.

We provide you with a list of stored cookies on your computer in our domain so you can check what we stored. Due to security reasons we are not able to show or modify cookies from other domains. You can check these in your browser security settings.

We also use different external services like Google Webfonts, Google Maps, and external Video providers. Since these providers may collect personal data like your IP address we allow you to block them here. Please be aware that this might heavily reduce the functionality and appearance of our site. Changes will take effect once you reload the page.