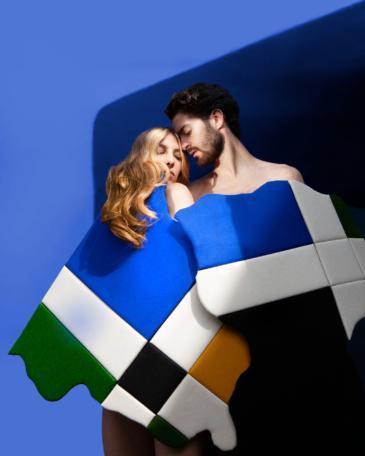 The Impossible Love of Tristan and Isolde

Conducted by Daniel Reuss Cappella Amsterdam sing Le vin herbé with soloists Thomas Walker and Carolyn Sampson. This magical masterpiece by the Swiss composer Frank Martin (1890-1974) is given a contemporary adaptation under the direction of Ulrike Quade in an animated decor by the artist duo Wandschappen, with choreography by Emio Greco and Pieter C. Scholten.

Le vin herbé is named after the ‘herbal wine’ that forges the love between Tristan and Isolde in the medieval epic. In this heartbreaking love story, Tristan and Isolde are both destined to marry another. However, a cruel twist of fate leads them to fall hopelessly in love with each other by accidentally drinking a love potion.

Frank Martin’s chamber opera about the tragic lovers is the opposite of Richard Wagner’s five-hour opulent performance. Compared to Wagner’s giant, Martin’s work, of less than two hours, stands out intimately. But, it is not without reason that Martin’s version is called a ‘secular oratorio’.

Martin’s hypnotic composition and touching story lend themselves perfectly to a multidisciplinary performance. In a frame story consisting of 22 tableaux, the stories are told of Tristan, Isolde and their destined lovers Branghien and King Mark. With the embrace between singing, music, visual theatre, puppetry, dance and design, this medieval story is mystically portrayed with two soloists, twenty-four choir members, eight musicians and six dancers.

This site uses cookies. By continuing to browse the site, you are agreeing to our use of cookies.

We may request cookies to be set on your device. We use cookies to let us know when you visit our websites, how you interact with us, to enrich your user experience, and to customize your relationship with our website.

Click on the different category headings to find out more. You can also change some of your preferences. Note that blocking some types of cookies may impact your experience on our websites and the services we are able to offer.

These cookies are strictly necessary to provide you with services available through our website and to use some of its features.

Because these cookies are strictly necessary to deliver the website, refuseing them will have impact how our site functions. You always can block or delete cookies by changing your browser settings and force blocking all cookies on this website. But this will always prompt you to accept/refuse cookies when revisiting our site.

We fully respect if you want to refuse cookies but to avoid asking you again and again kindly allow us to store a cookie for that. You are free to opt out any time or opt in for other cookies to get a better experience. If you refuse cookies we will remove all set cookies in our domain.

We provide you with a list of stored cookies on your computer in our domain so you can check what we stored. Due to security reasons we are not able to show or modify cookies from other domains. You can check these in your browser security settings.

We also use different external services like Google Webfonts, Google Maps, and external Video providers. Since these providers may collect personal data like your IP address we allow you to block them here. Please be aware that this might heavily reduce the functionality and appearance of our site. Changes will take effect once you reload the page.